Everyone loves weird/gross/interesting animal facts on a Saturday evening, so here is Part 2 of my list of completely useless animal facts! 😀

1) Frogs are unable to vomit. Being a reflex to get rid of possibly harmful toxins we have ingested, obviously lacking this mechanism means that if frogs eat something harmful they’ll kick the bucket right? Wrong! Rather than vomiting and bringing all its food back up in that revolting manner, the frog instead throws up its ENTIRE STOMACH, empties the contents of it, and then swallows its stomach back down! Neat huh? 😛

2) Despite the huge difference in length, giraffes and humans have the same number of bones in their neck: seven.

3) Dolphins can’t sleep. For humans, breathing is an unconcious mechanism as we live in the medium that we also happen to breathe, oxygen. For dolphins, living underwater but also needing O2 means that a dolphin is a conscious breather as it has to monitor its O2 intake and regularly come up for air. If a dolphin was to fully drift off into a peaceful slumber like we do it would drown! To solve this problem, a dolphin will take small naps with only one half of its brain at a time while the other half is still awake!

4) Baby Koala’s are not born with the ability to digest eucalyptus leaves. Obviously with eucalyptus being the only thing on the menu for a koala, this presents a bit of a problem! To help the babies digestive system develop the enzymes to overcome the toxins in eucalyptus, the mother feeds her baby a substance called pap…… which is er, well, pre-digested leaves….. yes she feeds her baby her faeces. As a result of this, the baby is able to eat eucalyptus when it is older, but is only able to eat the same types of eucalyptus as its mother did, as its immune system was only able to adapt to the pre-digested leaves it was exposed to in the mum’s poop!

5) A female ferret needs mate after she has gone into heat or she will literally die (because of a hormone imbalance)! While this is legit for the ferret, I wouldn’t put it past some humans to try and see if this excuse works with their partners: ‘Honey, if we don’t have sex right this moment I’m going to die!’ 😉

7) Ever wondered how once a bee has found a flower suddenly every other bee in the whole neighbourhood is suddenly at that flower too? When a bee finds something that will be of significance to the hive (new home/food source), it returns to its hive and it…… wait for it……. it dances! But this just isn’t any interpretive dance, this little bee’s ‘waggle dance’ is telling all the other bees EXACTLY where the food source is, from the direction and distance it is in relation to the hive right down to the angle it is at in relation to the sun!! And even when the bee is doing this dance for hours, he changes his dance (its direction and the amount of wiggles he does per cycle) in relation to the sun’s movements so he is still telling the other bees exactly where the item is even though it is a different time of day!

8) Ask anyone and they will tell you that a goldfish only has a memory span of three seconds. Common knowledge right? But is it correct? A 15 year old Australian school boy decided to test this theory by placing a beacon in the water when he was going to feed the goldfish, would wait 30 seconds and then sprinkle the food around the beacon. After 3 weeks, with a beginning time (at one week) of 1 minute to recognise the beacon and a finishing time (at three weeks) of less than 5 seconds after the beacon was placed into the water, the goldfish showed they now had established the food connection to the beacon. The boy then removed the beacon from the feeding process and fed the fish normally for the next week. When reintroduced 7 days later, the fish immediately recognised the beacon and reached it in 4.4 seconds, showing that they remembered it and could retain the information! Turns out goldfish aren’t as dumb as we think they are, and when you think about it are certainly smarter than some humans! 😉

9) In 1740, a cow was found guilty of witchcraft and publicly executed! On another note all our ancestors were obviously also crack addicts 😛 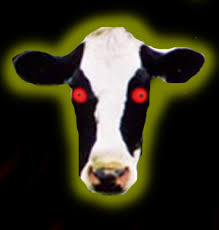 10) You think human’s are evolved? Try this on for size: there is a monkey species where the baby pulls itself out of the womb!! That’s right, none of that horrible pushing and straining that seems characteristic of childbirth, the mother just gives the first initial heave and the baby does the rest of the work! Now THAT is evolution!

11) A dog was the king of Norway for three years! After the King’s son was killed by his subjects, angry, the King gave the people of Norway a choice, to be ruled by his slave or his dog, and they chose the dog! You know a person is a pretty shitty option when a dog beats him in politics! 😛

12) Sand Tiger Sharks are fighting for life from the moment they come into existence, literally! While the mother produces many eggs, she can only give birth to one pup, so once the embryo starts developing it has to begin killing off its brother and sisters while still in the womb in order to survive! Talk about a violent start to life!

13) Never underestimate how dangerous a Rattle Snake can be….. even when its dead!! The instinct to strike at close movement is so hard-wired into a Rattle Snakes muscle reflexes that even with a dead brain an hour after its death it is still capable of killing you!

14) The penalty for killing a cat in ancient Egypt was death!

15) And once again on a more personal note, an animal story that occurred a little closer to home! Karta is an orangutan at Adelaide Zoo, whose enclosure (which I spend way too much time at when I am at the zoo :D) is surrounded by hotwires and high walls. To keepers, Karta never seemed to pay much attention to these things, so it was to their great surprise one day when she jumped ship and got out of her enclosure!! Orangutans are extremely intelligent and are perfectly capable of working through problems, which is just what Karta had been doing in the days leading to her escape. She had previously poked the hotwire with a stick, but on the day of her escape, the smart little cookie twisted the stick through all of the wires causing them to touch one another and short circuited the whole system! Once she had done this, Karta then started ripping up plants and placing them up against the wall to make herself a ladder to get out! And after all that effort, Karta hopped over the wall, saw freedom wasn’t all it was cracked up to be, and climbed back into her enclosure! After her little adventure the keepers decided they better have a better look into their animal security systems haha 😉

Until next time lovelies 🙂